We had awesome presentation put on by Mr. Brendan the "Reptile Guy" at HTB! He brought two snakes, five hissing cockroaches, one bearded dragon, one lizard, and a spider! Mr. Brendan talked to each class about where the animals came from and how they survive in their own habitats. The children loved all the animals and were thrilled to see and touch them! 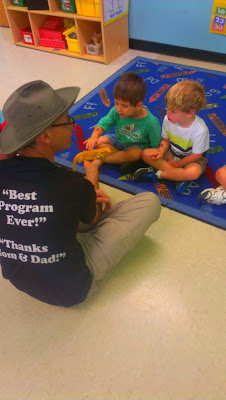 The children called the bearded dragon a "dinosaur." 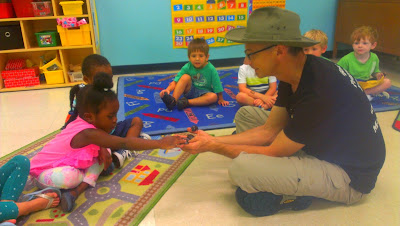 One of the insects that Mr. Brendan brought with him was Madagascar Hissing Cockroach! He told the children that they lived in a warm climate and that if they were not in a controlled environment they would not survive. 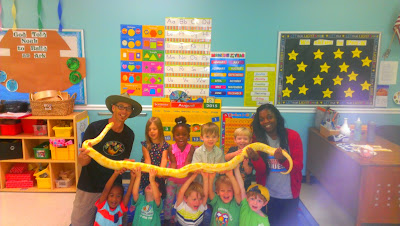 Meet Sunshine! Sunshine is a beautiful Albino Burmese Python. The children loved the beautiful python. At the end of the show, the children were able to hold the python up in the air for a group picture!  Say "cheese!" 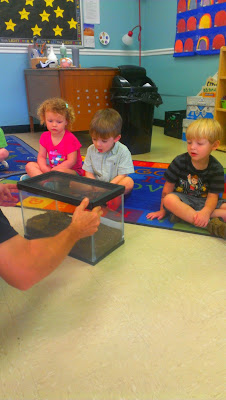 One of the animals that the children did not get to pet was the Rose Tarantula! "Rose" had a rose colored spot on her back, he told the children the reason they could not pet Rose was she had venom, so it was safer just to look at her thru the glass box! 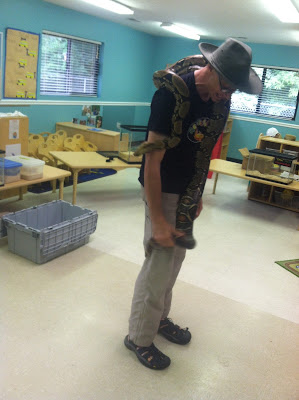 This animal is a 9 year old Red-Tailed Boa constrictor named Mr. Freckles!
Mr. Freckles changes colors! He can be dark brown, light  brown, red, and sometimes black. Mr. Brendan talked to the children about his colors and the texture of his skin.

For more information about the "Reptile Guy," you can reach him at: www.reptileguy.net

For more information about our program, please visit our website at: www.hollytreechildcare.com

Posted by Holly Tree Brentwood at 10:30 AM